Behind the Scenes Interview with Kevin Atlas

This Tuesday, Farragut High School was lucky enough to have businessman and motivational speaker, Kevin Atlas, come and speak with the student body and many of the faculty. Mr. Atlas was a nationally ranked basketball player in high school who started four successful companies, and he now inspires students around the globe, all with one arm. The Anchor was lucky enough to get an interview with Atlas and learn more information about his life and happenings.

Kevin Atlas has been all over the world, including 49 out of 50 US states.

When asked what was special about Farragut, Kevin responded, “I think that you have really great kids at this campus. To be honest, I just think they need a little push in the right direction, kinda to spread that love and kindness instead of being mean to each other all the time.”

When speaking with the student body, Atlas encouraged complimenting new people every day because it might help someone who needs that support or lead them to help someone else.

Atlas challenged the students of Farragut to participate in the #BelieveInYouChallenge, asking them to support one another by spreading compliments and good deeds to create a ripple effect for the rest of the school. He cited his own experience in high school, where two kids making a team flag for a disabled student led to himself and eight others supporting a girl dancing alone at prom. Atlas said it was his proudest moment in high school.

Although Atlas said losing his parents was one of the hardest challenges to overcome in his life, he stated, “The greatest setback that I had in basketball was not my ability to play, but getting recruited by coaches because they didn’t know how to make me better… my nub is not my disability. People’s perceptions of what I was capable of was my disability.”

Part of Atlas’s message is perceiving your disabilities as strengths, but overcoming how others perceive those disabilities is another challenge in and of itself. 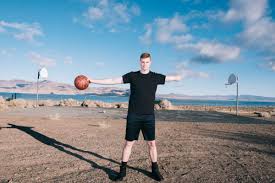 After hearing Atlas speak, Farragut senior Nathan Miller remarked, “I was impressed because most people that come and speak don’t actually care about the students, but [Kevin Atlas] actually cared about us and wanted us to be better.”

Nathan said the message that impacted him the most was the idea that most high schoolers just float through their four years while never putting in enough work to get the things they want out of life. He agreed with Atlas that most students probably just go home and watch Netflix instead of working towards a goal or improving themselves.

When challenged to leave only one piece of advice for Farragut students, Atlas said, “You don’t get high school twice, and you really gotta decide how you’re gonna prioritize your time here. Do not float… take those risks and be really kind to everybody.”

Atlas reiterated that individuals should not be afraid of failure and to take risks. He referred to high school as a testing ground to build up your confidence and grow.

If you want to learn more from Kevin Atlas’s wisdom and experiences, his motivational book Get in the Game is out now online and in local bookstores.